Prof. Kurt Chan is regarded as a prominent figure in the Hong Kong contemporary art scene since the 1990s, focusing on installation and mixed media in his early artistic practice. He began his pedagogic career in the Department of Fine Arts, at the Chinese University of Hong Kong in 1989 and pioneered in teaching installation and mixed media art in systematically structured courses. His creative process mainly cuts into the cultural significance of existing objects through their physicality, which instils his works with a poetic aura. In 2016, after Chan retired from his 27-year teaching career at CUHK, he began deploying painting as his major creative medium which is backboned by methodologies of Chinese calligraphy. He focuses on the calligraphic quality in painting and searches for a balance between the Western rational tradition and the Eastern expressionist tradition in his practice.

Chan Wai Lap is a local artist born in the 80s, he had previously participated in artist residencies in locations such as Tai Kwun Contemporary, Turkey and New York City. Chan’s works continue to address the relationship between public spaces, humanities and his inner self in different cities. Throughout his extensive research, the artist has posed a list of questions about the privateness of public space. Not only is a changing room the only and the most private place among public pool areas, it also gathers groups of strangers where they share short moments of awkwardness, catching a glimpse of one another’s inner worlds, “similar to what we initially encounter in a date or relationship” Chan explains.

Livy Leung was born in Hong Kong in 1996. She graduated with the Degree of Bachelor of Visual Arts from Hong Kong Baptist University. Leung constructs a world between fantasy and reality by featuring scattered and unobtrusive elements and the stress she experiences in her daily life as the subject. She recomposes her thoughts towards different incidents that are happening around her, she then amplifies her imaginary world as a form of expression and self-indulgence within her own creative process.

Ng Chung was born in Hainan, China in 1963. He graduated with a Bachelor of Arts Degree from the Printmaking Department of the Guangzhou Academy of Fine Arts in 1992 and migrated to Hong Kong after graduating. Bottle paintings are from an iconic series of Ng Chung. He has been painting wine bottles for more than two decades from his studio situated in the heart of Lan Kwai Fong. Bottles have become recurring objects in his paintings because of his sentiment towards alcohol, it has also transformed into a ‘symbol’ for expression, in turn enabling the artist to search for his personal identity through the painting process.

The paintings of Elías Peña Salvador pay homage to the transcendent nature of everyday life. From the intimacy of public spaces to the pervading sense of community and camaraderie in a crowd. Salvador luxuriates in it and is inspired by the delicate subtleties of life, he then uses this as a basis to dive deeper into the inner workings of society. His paintings are works of figuration and abstraction, chaos and harmony; They serve to examine and immortalise the ephemeral instant that separates accident from chance. Salvador's paintings are not about creating something new. Instead, they serve as a gateway to reenter the monotonous everyday world, a fervid reminder of the beauty and vitality of the world surrounding us, leaving viewers enlightened with transformed eyes to appreciate the world around us.

Hazel Wong Mei Yin (b.1992), born and raised in Hong Kong, graduated from the Academy of Visual Arts, HKBU. Her works include paintings and independent publications, focusing on exploring her personal sentiments about living in a modern metropolis. She seeks out ordinary but unforgettable moments in life and narrates them as stories or sequences of events. She founded otto with Tiffany Tam in 2017, and publish zines and printed matters. Her works have been exhibited in Hong Kong and overseas.

Wong Sze Wai uses ruins as her theme of focus, interpreting such as a vessel for memory and history. As she wanders through the forgotten corners of the city, Wong exercises her powerful imagination to construct an idiosyncratic “wonderland of daydream” transcending time and space on her canvases — A parallel universe that is like a piece of treasure, buried deep in a mysterious forest, awaiting its excavation. Drawing inspirations from the ancient Chinese murals in the Dunhuang Caves and the Medieval murals in Eastern Europe, Wong deploys mineral colours and delicate brushstrokes to render a sense of nostalgia in her artworks, evoking the ruminations of the possible past. Wong renders the prosperous metropolis through a tranquil lens, exhibiting the untrodden haven of mysteries with a futuristic vision. As she guides us onto a soul-searching journey that allows us to reflect upon ourselves, and ponder on our relationships with the greater spectacle. 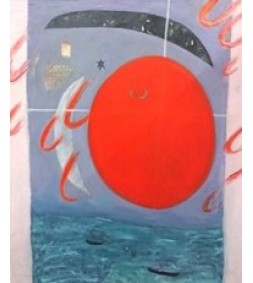 When the sun came close 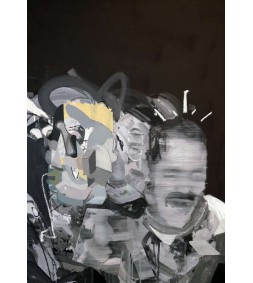 My St Juan of Joy

My St George of Sorrow 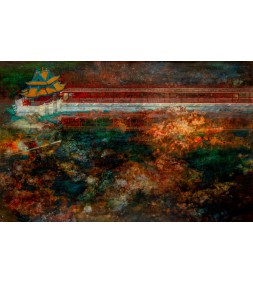 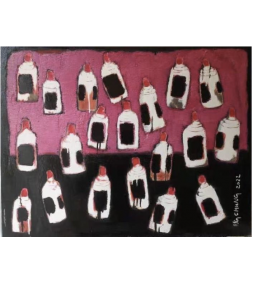 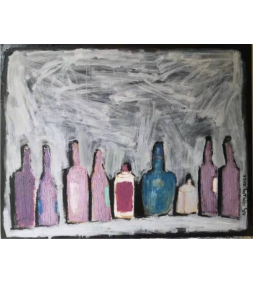 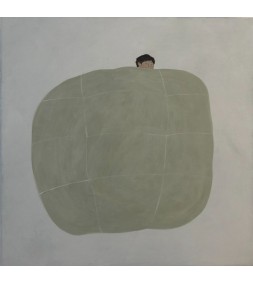 Peter wants to be a tree I 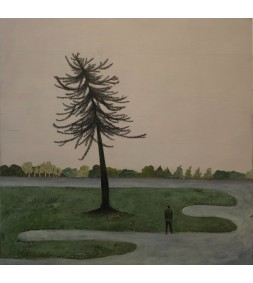 Peter wants to be a tree II