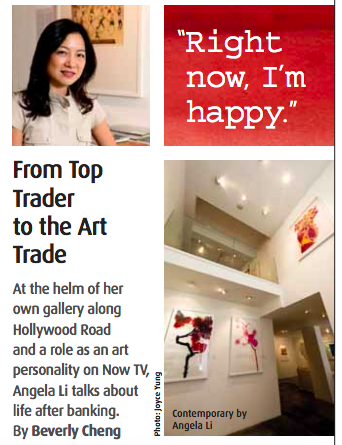 From Top Trader to the Art Trade

From Top Trader to the Art Trade
By Beverly Cheng

— At the helm of her own gallery along Hollywood Road and a role as an art personality on Now TV, Angela Li talks about life after banking.

“I have Chinese parents,” explains Angela Li, “and although I liked art and painting—thinking that I was quite good—I didn’t take art beyond GCSE and basically never ever expected myself to do something in art.”

Li went to London School of Economics instead, and was lost in a sea of students from around the world that all shared the same aspiration—a career in investment banking. “Ninetyfive percent of my peers wanted to be investment bankers. The five percent remaining wanted to be lawyers, accountants and politicians,” Li laughs. Unable to break from the mould, she soon snagged a job as a trader at the HSBC treasury. The exciting pulse of the trading floor was electrifying at first, but the allure quickly faded three years into the job. “Back then, my eye bags were down to here, not that they’re much better now” Li jokes, pointing down to her jaw line. “It’s a stressful job, and at the end of the day, I was doing it for other people.”

Li escaped from daily work stress by immersing herself in the local art scene, collecting art and gradually befriending artists and gallery owners along the way. Inspired by the seemingly fabulous lives of her jetsetting gallery owner friends, Li eventually left her job in finance. “I didn’t look underneath the glamorous exterior to see the complicated side. I just saw the exhibitions, the parties and the traveling.” For the first couple of years, Li cold-called prospective clients and learned from people in the business, before opening a showroom in Central near Lan Kwai Fong.

At the time, appreciation for Chinese art was still in its infancy and Li toyed with the idea of opening a gallery dedicated to contemporary art, a platform for artists she admired. But it was not until 2008 that Contemporary by Angela Li opened its doors with an inaugural exhibition by photographer Chen Jiagang. Today, Li still represents a handful of Chinese artists abroad, many of who are her closest friends.

In a lucrative art market, Li boldly stands by her tastes, choosing artworks strictly based on her gut feeling rather than solely on what the market wants. “Art is supposed to be challenging; you have to take a step further and challenge ideas. I make choices based on what I like and how it moves me,” says Li. “If you talk to anyone and they look at my exhibitions and what the artists represent, they can say: ‘that’s Angela’s.’”

Recent development along Hollywood Road has led to more business, but Li doesn’t have any plans to expand just yet. “Right now, I’m happy. It already gives me a decent amount of work, I don’t want more,” she says.